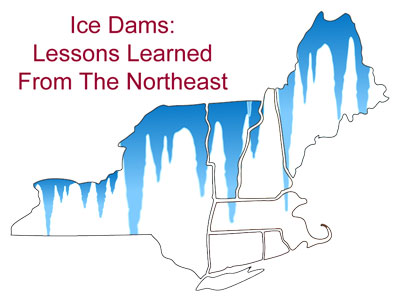 Mother Nature has not been kind to the Northeast the last few years. Hurricane Sandy brought destruction and damage in 2012, while the winter of 2013-2014 featured a “polar vortex” descending over much of the Midwest and Northeast. Last year New England received record snow, and a lengthy period of low temperatures. This resulted in significant damage to homes and businesses, largely from ice dams and other roofing issues.

An ice dam forms when melting snow and ice refreezes on the roof, typically as it moves over a cool eave, into a gutter, or in shaded areas like dormers and crickets. If not properly dealt with, an ice dam can cause water to make its way inside the structure.

As preparation for winter 2015-2016 wraps up, we take a look at some of the lessons learned last year.

Boston and surrounding areas were so inundated with ice dam problems that roofers and other contractors could not keep up. Many headlines featured companies from the Midwest relocating to Massachusetts to provide ice dam relief.

According to news reports, ice dam removal in these areas was running $500-600 per hour. At 4-5 hours a job that adds up quick. Then consider that without a permanent solution, the ice dam will return and need to be removed again.

Allowing snow and ice to collect and build up on the roof can be very risky. As the ice builds up and forms ice dams, water can leak into the building causing significant interior damage, and compromising the roof. In some circumstances, snow loads can become a concern as low temperatures keep snow and ice from melting.

Left unchecked, ice dams can wreak havoc on a home or business, costing tens of thousands of dollars and even forcing individuals from their homes.

Not Having an Ice Dam can Still be Expensive

As repairs have been made, so have insurance claims. With the vast amounts of damage dealt in the Northeast last year, insurance companies are revising rates in many areas, impacting even those fortunate enough to have avoided winter woes.

With insurance companies paying out millions of dollars in claims, rate hikes aimed at controlling costs will surely ruffle feathers of those untouched by ice dams. 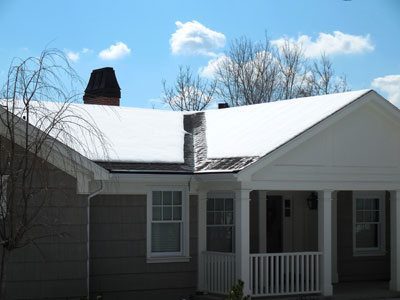 A roof deicing system in action.

The best way to manage ice dams and other winter problems is to prevent them. There are many approaches to take, but often the best and most permanent solution is a roof deicing system. These systems are installed beneath the roofing material and heat the trouble areas, removing snow and ice. They can be activated with sensors, allowing them to be fully automated and run during and after storms. Alternatively, self-regulating heat tape can be used to provide water a path off the roof. These cables are installed on top of the existing roof and in gutters and downspouts.